Arnold Schwarzenegger, the former Governor of California, has recently revealed that he no longer consumes meat and dairy products. He drinks almond milk and eats non-dairy ice cream as well. This article goes through how he avoided animal products, the health benefits of a plant-based diet, Arnold Schwarzenegger’s ‘The Game Changers,’ and the present vegan meal of Arnold Schwarzenegger.

Individuals may eat eggs, cheese, and milk. However, they avoid eating meat, like pork, chicken, and beef. They take the protein offered by a plant-based diet.

Will include only a raw plant-based diet. Flexible people who try to prevent eating meat and plant-based food like vegetables with some animal products such as cow milk adopt a flexitarian diet.

What made Arnold switch to a plant-based or Vegetarian Diet?

Schwarzenegger became health-conscious in the past few years. In his younger days, he would consume 10-15 eggs in a day. He has also given up on eating meat, which he previously consumed in large quantities. He said that instead of dairy products, he eats oatmeal, fruit, vegetables, greens, and other healthy foods in an interview. He stays distant from food that is not vegan because he has relinquished a misconception that only eating meat will make him big. However, in recent years, Arnold Schwarzenegger has realized that it is not entirely accurate and feels better consuming a plant-based diet.

The former Governor of California spoke on a video saying that animal products are supplements that, in actuality, supplement the healthy food we eat. He believes that one must try not to rely on food in the name of health benefits like eating meat and ice cream made of animal milk. Instead, eat vegan foods like fruit, vegetables, a lot of greens, and excellent vegan proteins.

How Do Vegan Foods Improve Your Health?

There are several health benefits of a vegan or plant-based diet. If you eat vegan, your blood pressure can be lowered over time. Other problems, including type 2 diabetes, heart disease, and stroke, are also less of an issue when committing to a vegan diet. Fruit and vegetables can also help reduce your weight and help give you a longer life. The risk of cancer decreases if you consume ice-cream made of almond milk and eat vegan foods. Vegans avoid animal products and thus improve their cholesterol levels. Vegetarian or vegan diets help enhance your brainpower and keep it healthy. The chances of cognitive impairment and dementia reduce considerably as well.

The Game Changers is a documentary film of 2018 that highlights a plant-based diet’s health benefits for athletes. The movie shows the success stories of athletes who avoided animal products and strictly preferred plant-based foods. It also references various scientific studies and touches on many arguments for a plant-based diet by non-athletes.

Although it is not an action film, the box office review of The Game Changers is very positive, and many health organizations have encouraged the film.

Arnold Schwarzenegger is an executive producer (co-producer of The Game Changers), actor, bodybuilder, former Governor of California, and philanthropist. He has had many accomplishments in his life such as starring in the Terminator series, becoming Mr. Universe at 20 years old, and then, later on, going to win Mr. Olympia seven times. He intends to remove the misconception that eating meat provides endurance, stamina, and strength. He said that the meat industry is extensively marketing eating meat. These industries sell the idea that strong men essentially consume meat. It is, however, not based on reality.

All the other celebrities, including James Wilks, Derrick Morgan, Kim Williams, Lewis Hamilton, and Scott Jurek, have portrayed the health benefits of vegan foods, fruits, vegetables, nuts, and the protein content present in tofu and tempeh.

What is the diet of Arnold Schwarzenegger?

Schwarzenegger keeps his fridge full of fruit, vegetables, and vegan meat. He whips up a smoothie with the almond milk of Califia Farms, decorated with tart banana and cherry juice as the best sources of protein, and consumes watermelon in summers. He takes three scrambled eggs for breakfast, one cup of orange juice, and one cup of cooked oatmeal.

It has been scientifically tested on animals that vegetarian and vegan diets are excellent for health. Arnold’s first health tip is to know the needs of the body and set goals accordingly. He also focuses on the requirement of protein in the body—any athlete, whether marathoner or lifter, should take protein for muscle recovery and growth. One must also reduce sugar intake as far as possible and focus on consuming more fiber. The former Governor of California recommends eating vegan and other nutrients according to the needs of the body. Protein powder, multivitamin, and mass gainer are great to help make you healthy.

Schwarzenegger focuses on having a robust and healthy body, but not at the cost of depleting oneself and the environment. He has willingly addressed many climate change programs that aim to build a greener future. His primary concern has been the greenhouse gasses. His former wife, Maria Shriver, has also adopted a vegan lifestyle and promotes a plant-based diet.

Californian voters rejected the suspension of AB32 environmental law because of the active support of Arnold Schwarzenegger. He has done good research on the harmful effects of eating meat, the increasing pollution, heart disease, and climate change due to foods other than vegan. This research is why he switched to a plant-based diet of fruits, vegetables, nut milk, and making an exception to eat eggs for protein.

He has also been an integral activist against cattle farming and dairy products. Arnold Schwarzenegger encourages his fans to eat vegan and enjoy its enormous health benefits. 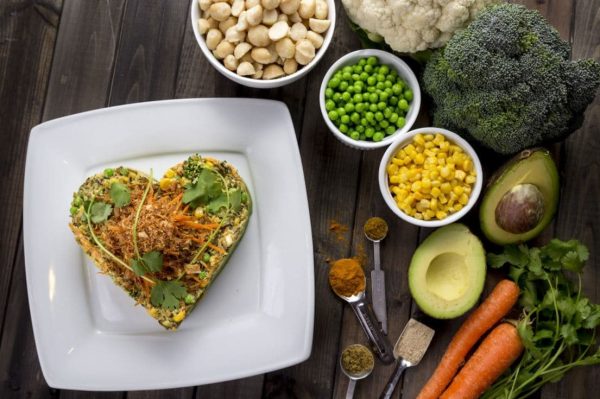